Finance Minister Avigdor Liberman came out Wednesday against the imposition of further coronavirus restrictions, saying that the measures currently in place appeared to be working.

“When we look at the morbidity situation, there is a stabilization in the figures and there is cause for optimism,” Liberman said during a briefing to reporters. “We need to stop talking about new restrictions and let the economy work.”

Additionally, all children ages 3-12 must show a negative COVID test in order to enter most public attractions, leading to the setting up of dozens of rapid testing sites nationwide.

The restrictions are aimed at slowing down a recent resurgence of coronavirus infections that have taken the daily caseload to highs not seen for half a year.

Liberman said on Wednesday that the government must wait to see the full impact of the new measures before deciding to add to them.

“We have had [the new rules] for less than ten days. One has to let things play out to understand whether the limitations work or not. Imposing new restrictions is simply not right,” he said, adding that he saw no need to expand the Green Pass system to open-air restaurants and swimming pools.

The treasury chief also pushed back against calls by business owners for compensation.

“We have allocated hundreds of millions for testing. Go to Superland and restaurants — everything is full,” he said, referring to an amusement park in Rishon Lezion. 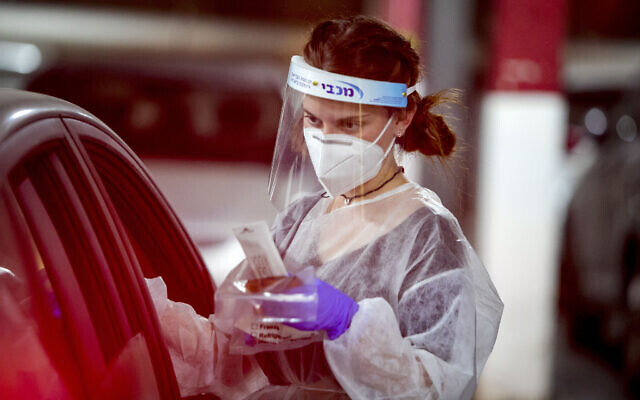 A healthcare worker examines a COVID test sample at a drive-through facility in Modi’in, on August 15 2021. (Yossi Aloni/Flash90)

The number of cases is near the all-time record of 10,213 reached in January, although the current positive test rate of 6.69 percent — much lower than previous rates of up to 15% — indicate that they are being boosted by the high number of tests, which were at 150,657 on Tuesday.

He went on to compare the COVID-19 pandemic to the flu, saying that just as Israelis “know how to live alongside the flu, the same thing [should be the case with the] coronavirus.”

Most of Lebanon’s People Face Critical Shortages of Water

It’s crunch time for the administration. President Biden, his ai…

Finance Minister Avigdor Liberman came out Wednesday against the impos…